The man behind the food phenomenon that is Lizotte's has over 30 years experience in the hospitality industry in Australia, Europe and U.S.A.

Mention the name Brian Lizotte to anyone in the entertainment industry and a smile instantly grows on their face, let alone the licking of lips.

After graduating with a Diploma in Catering and Hotel Management, Brian first started in the backroom of Rhinoceros Studios cooking on the hop for the likes INXS which then turned into a fully fledged catering company More Than A Morsel.

More Than Morsel was the first truly national entertainment caterer serving local and international artists such as Frank Sinatra, Madonna, John Farnham, Bob Dylan, U2, Elton John and Billy Joel, Nirvana and pretty much every Australian artist you can think of. Brian specifically catered to their taste buds with the question “where do you want to go tonight” not what would you like to eat. His flare for creating unique dishes using a twist of local and Australian Native flavours set him apart from all the other players and he was on every artist's wish list for tour catering.

After many years of trudging around the country with road cases, Brian and his wife Jo setup their first Lizotte's restaurant on the Central Coast which for a decade was THE place for local and international touring artists to perform at. To be honest, many artists also come here just for the food and the TLC that Brian gives his artists in addition to his patrons.

He has developed a niche that many other venues around the country try to emulate and is constantly approached to franchise and open more Lizotte's restaurants nationally.

Lizotte's has won the coveted R&C NSW Entertainment Restaurant of the Year for the past three consecutive years (2006, 2007, 2008).

In 2007, Lizotte's released their first compilation album in a series of CD's that feature artists who perform at the venue. Menu 1 and Menu 2 have been released to overwhelming reviews and Menu 3 is planned for early 2009.

In November 2008, Live & Cookin' @ Lizotte's (the recipe book by Brian Lizotte) was released by New Holland Publishers, and overdue and long awaited by many. Over 200 pages packed with scrumptious recipes that have fed some of the biggest stars in the world, perfected over the years of catering for local and international artists, Brian's dishes are not only ‘to die for' but also have the simplicity for making these dishes in your own home, for a dinner party, or general meal. The trials and tribulations that are an accompaniment to many of these dishes are something to be discovered through a conversation with Brian himself or a personal visit to Lizotte's Restaurant in Newcastle and whilst you're there you'll not doubt catch an amazing and intimate artist performance.

After being with Brian for some time, one thing you'll notice is his undying passion for food, music and great company. Like his mantra says “Fine Food with a Musical Mood”. 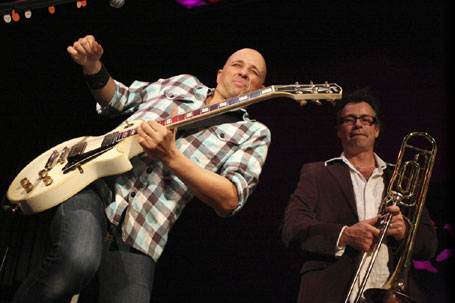 Graduated with a Diploma in Catering and Hotel Management.

Founding Director of MORE THAN A MORSEL CATERING. Specialising in the music, entertainment, fashion and film industries and a growing number of corporate clients. More Than A Morsel also specialised in offering an array of Australian Native flavours.

Responsible for the initial contact with Laissez Faire Caterer, which lead to the merge of the two companies to form DJANGA Australia.

Director and shareholder in the catering contract at The Australian Technology Parks Eventsite. Successfully sold shares in DJANGA Pty Ltd to existing partners

Auditioned and short listed as celebrity chef for the Midday Show with David Reyne and Tracy Grimshaw.

National catering Coordinator for the U2 National tour of Australia.

Completed a series of cooking demonstrations for the opening of the new Warringah Mall complex in Sydney and have been re-booked for further demonstrations in October/November 2000.

Catering coordinator for the Cold Chisels ‘Last Wave of Summer Tour' for their National Australian tour.

Toured with Mark Lizotte aka Diesel as dressing room/catering coordinator and merchandise manager.

Successfully developed concept and setup “Lizottes on the Bay” a 100-seat seaside Bistro in The Hardys Bay RSL Club on the Central Coast of NSW, Australia securing a 6-year contract.

Developed concept for television lifestyle show featuring music, food and wine. Successfully completed TV pilot in April 2000, which was launched to music, wine and record company executives in the residence of Jimmy Barnes. The pilot was re-shot with Tim Farris of INXS, Mental As Anything. Concept is still being developed and to be launched and promoted with TV networks scheduled late 2005.

October - launched a range of Native Food and value added products under the trade name of Lizottes On The Bay with possible Internet sales pending.

Relocated Lizotte's Restaurant from Hardy's Bay to it's own home in Kincumber. Relaunched Live @ Lizotte's Dinner Shows providing first class entertainment up close and personal on the Central Coast.

Playing trombone and joining forces with Hank and Michael Lizotte to form the Tassie Horns, on Diesel's live DVD “the first 15 years” performed lived at the Metro Sydney. As well as various other performances including Brian Adams at the Melbourne Tennis Centre and several Diesel shows Live at Lizotte's

Currently working on creating a national television series, Live n Cookin @ Lizotte's which will incorporate an interactive cooking show together with the cream of the music industry.

Currently working on creating a national television series, Live n Cookin @ Lizotte's which will incorporate an interactive cooking show together with the cream of the music industry.

Teamed with Karen –Lee Goody of Entertainment Consulting to create a series of compilation releases featuring artists who have performed at the award winning restaurant and venue Menu 1 and Menu2 out now. Menu 3 planned for a 2009 release.

Lizotte's now offers a state of the art recording facility to artists for a live recording.

Brian won the Australia Day Community Award for Business from Gosford City Council for working tirelessly with schools, community groups and charities to help foster the talents of young people within our community.

Appearance on Mornings with Kerry Anne - Channel 9 in September 2011.